Soju is a traditional Korean distilled beverage made from rice, wheat, or barley. Soju is clear and colorless, and usually has an alcohol content of between 15%-30%. It is typically served neat in small glasses, and is often consumed as a shot. Soju is the most popular alcoholic drink in Korea, and is also popular in other Asian countries such as Japan and China. Soju can be enjoyed on its own or mixed with fruit juices or other beverages. It is also commonly used in cooking, and can be used as a marinade for meat or added to soups and stews. Soju has a long history in Korea, and is an important part of Korean culture.

Is Soju stronger than vodka?

When it comes to hard liquor, there are a lot of choices out there. Whether you prefer vodka, whiskey, or tequila, there’s a drink for everyone. But what about soju? This Korean spirit is often compared to vodka, but is it really any stronger?

The answer depends on a few factors. First, it’s important to note that soju is typically only around 20% alcohol by volume (ABV). In comparison, vodka usually falls between 35-50% ABV. So right off the bat, we can see that soju is less potent than vodka. However, that doesn’t mean it’s any weaker – in fact, some people find soju to be just as strong, if not stronger. This is because soju is typically drunk straight, without any mixers. Vodka, on the other hand, is often diluted with water or juice. As a result, you might end up drinking more soju than vodka in one sitting, which could lead to a quicker buzz.

So in the end, it’s tough to say whether soju or vodka is stronger. It really depends on your personal preferences and drinking habits. However, we can say for sure that soju packs a punch – so drink responsibly!

What we need for Yogurt Soju Cocktail

Soju : You can use any flavor of soju you like, but my choice is yogurt soju.

Yakult : Yakult is a Japanese probiotic milk drink that is said to have many health benefits. It is also used as an ingredient in soju cocktails. The Yakult gives the cocktail a slightly sour taste, while the soju and fruit juice help to balance out the sweetness. Yakult soju cocktails are refreshing and easy to make. They are also a great way to get your daily dose of probiotics.

Sprite : Sprite is a carbonated soft drink that is also clear and has a sweet taste. You can use no sugar sprite. Enjoy your soju cocktail responsibly!

How to make Yogurt Soju Cocktail

Soju is a Korean distilled beverage that is typically made from rice. It is clear in color and has a very high alcohol content, making it a popular choice for shots and cocktails. One popular way to enjoy soju is in a yogurt cocktail. To make this refreshing drink, simply add ice cubes, Soju, Yakult (a sweetened yogurt drink), and Sprite to a shaker. Give it a good shake and then pour into glasses. Enjoy cold!

Yakult is a fermented dairy drink that is popular in many Asian countries. It is made by combining Yakult Probiotic strain Lactobacillus casei shirota with milk. Yakult has a number of health benefits, including boosting the immune system and improving gut health. Soju is a clear Korean alcohol that is typically made from rice. It has a high alcohol content, making it a popular choice for cocktails. The Yakult soju cocktail is a refreshing and nutritious drink that combines the probiotic benefits of Yakult with the traditional Korean liquor. When these three beverages are combined, they create a refreshing and delicious cocktail that is perfect for any occasion 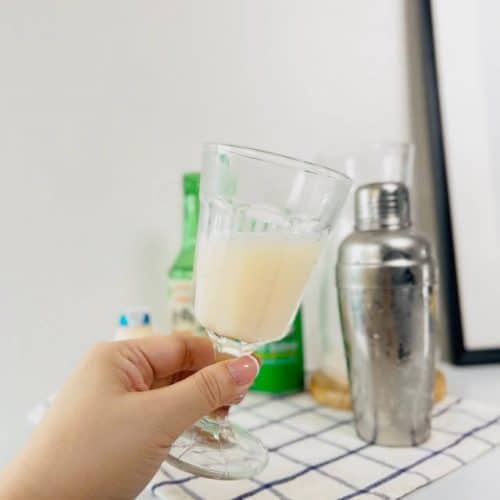 This refreshing drink is made by mixing soju, yakult, and sprite in a 1:1:2 ratio
5 from 1 vote
Print Recipe Pin Recipe
Servings 1 glass (150ml.)